The Neuropsychology of Teamwork Although teams are our default organizational unit, team leaders often struggle to get individuals to cooperate and coordinate. Partly, that’s down to the fact that each individual has their own agenda for getting ahead, which they balance with getting along with everyone else.

Getting along is the hard part. We became hard-wired through evolution to prefer our own kind and to distinguish friend from foe. Although we are inclined to cooperate, we are also hard-wired for competition and war, which makes coordinating with others tricky. Science is now telling us more about how to manage people and teams to activate neural pathways for either trust and collaboration or conflict and competition. Here’s how to harness our neuropsychology to build better teams.

There is a right size and a wrong size for teams. Amazon boss Jeff Bezos thinks it’s small – he has the “2-pizza rule” – no meeting should take place with more people present than can be fed from 2 pizzas. The late Harvard professor Richard Hackman agrees, remarking, “My rule of thumb is no double digits. Big teams usually end up wasting everybody’s time.” Bottom line: keep teams between 5- 10 people.

The reason smaller teams work is to do with the limits to our ability to hold and sustain good working relationships. Although research strongly suggests that the human brain got bigger and smarter as we learned to cooperate, evolutionary psychologist Robin Dunbar concluded that we have real cognitive limits. 150 people is about as large as anyone’s social circle can meaningfully be, but a group of around 5-10 people was an optimum working group. As the number of people in a team increases, the number of connections rises exponentially – by the time there are 15 people on the team there are over 100 possible interactions to deal with: 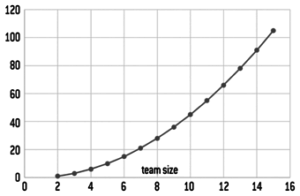 Google spent years pursuing the idea that good teams came from having the brightest and most skilled people on board. But they were wrong.

Studying hundreds of Google teams revealed that one of the most critical factors differentiating good from poor teams was how safe they were for people to be open and share ideas. Underpinning psychological safety in teams is the neuroscience of trust.

Paul Zak of Harvard identified oxytocin as a critical precursor to feelings of trust and trustworthiness. Oxytocin is sometimes administered to new mothers to stimulate bonding with babies – and Zak found that at work raising oxytocin levels reduces social distance and fear of others. His lab has spent years looking at promoters and inhibitors of oxytocin production in the workplace:

Zak reports that promoting trust is good for business: staff in high-trust organizations are more productive, collaborate better with their colleagues, suffer less chronic stress and are happier with their lives.

One of the more remarkable findings in the last 25 years has been the discovery of mirror neurons in the brain. Put simply, mirror neurons react when we see another person have an experience – as if it were ourselves having that experience. Although there is a lot of scientific debate about their direct impact on our behavior, it is commonly understood to be critical to our sense of empathy and understanding, as in, we can feel what the other person is experiencing.

Mirror neurons suggest that emotions don’t just come from inside us (“I feel excited”), they can also be produced unconsciously from seeing someone else feel excited or pleased. That matters, because researchers have learned a lot about the ripple effect that passes emotions through a team, and generates a collective emotional state. Teams respond consciously or unconsciously to how other team members are feeling, and to the emotions of the team leader. Since humans tend to put more weight on negative events and feelings than good, leaders who display bad moods, or who create stress and unhappiness in others, will impact the team and lose follower regard.

Acting positively, and supporting an upbeat climate in the team, will increase engagement and boost productivity.

Suzanne Bell is a prominent teams researcher who helps NASA choose the mix of personalities for space missions. Her work suggests that personality – how you are deep inside – will impact team performance, especially in combination with others. Having conscientious, detail-oriented people on a team is good news, as is having people on board who are warm and agreeable. Having worrying, negative types is not so good.