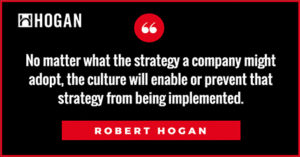 Culture can best be defined in terms of the values that guide the behavior and decision making of a social unit—a team, a family, a business, etc. Culture is not vague and touchy-feely; cultures can be easily and reliably assessed using any number of commercially available survey instruments. Cultures have real, concrete behavioral consequences, and they directly influence the performance of business organizations. As Peter Drucker, the founder of modern management practices, observed: “Culture eats strategy for breakfast.” That is, no matter what strategy a company might adopt, the culture will enable or prevent that strategy from being implemented.

A concrete example might help. Several years ago, we were contacted by a newly opened, high end hotel in London because it was struggling financially. We assessed the top management team using our measure of values and found the following. On the one hand, the top management team had very high scores on the Customer Service, Aesthetics, and Hedonism scales, which meant that they cared deeply about quality, style, and providing a superb and enjoyable customer experience; these values are perfect for hospitality. On the other hand, the top management team scored low on the Power and Commerce scales—which meant that no one cared about making money or beating the competition—and this explained their poor financial performance.

There are four points about values that are worth noting. First, when people join organizations, they bring their own values with them, and the degree to which their values align with the values of the culture powerfully affects their subsequent performance. As Clarke Murphy, the CEO of Russell Reynolds Associates, observes, “We hire for talent but we fire for fit.” No matter how talented people might be, if their values are inconsistent with the culture of their organization, they will not succeed.

Third, values are largely unconscious. People rarely reflect on their values because they are part of “the world taken for granted;” values are to people much like water is to fish—values are just part of the environment in which we operate. External feedback is usually needed to become aware of our values and our workplace culture.

Fourth, not all values are equally valuable. For example, some values like greed and selfishness create dysfunction in the groups and businesses where they exist; dysfunctional cultures seldom realize lasting success.

Finally, all successful teams share essentially the same values; these include tolerance, fitting in with the team, loyalty, hard work, a commitment to excellence, and an intense desire to beat the competition.